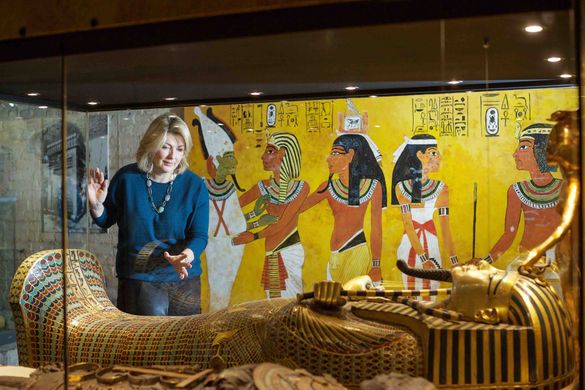 This autumn will mark the centenary of one of the world’s greatest archaeological discoveries, when Egypt shines a global spotlight on the treasures of King Tutankhamun.

November 2022 sees the 100th anniversary of the discovery of the boy king’s tomb, but while many of the vast treasures will be displayed in Egypt’s new Grand Egyptian Museum, visitors can also discover Egypt in glorious English countryside… in Hampshire.

And nowhere else in the world can also offer a visitor attraction where Tutankhamun meets Downton Abbey.

Highclere Castle, in Hampshire, might best be known as the real life setting for the hugely popular TV series and movies, Downton Abbey, but it also has links to that milestone moment when Tutankhamun’s final resting place was revealed to the world once more.

The Castle has been the ancestral home to the Carnarvon family since 1679 and in November 1922, the 5th Earl of Carnarvon was alongside archaeologist Howard Carter when they became the first souls to enter the sealed burial chambers in more than 3,000 years.

After Carter uncovered the 22 rock cut steps in the Valley of the Kings in Luxor, Egypt, Lord Carnarvon – who had paid for the archaeologist’s search for Tutankhamun – joined him at the site, and on 26 November 2022 they both entered the tomb’s interior chambers to find them virtually intact.

The discovery of King Tut’s tomb remains one of the world’s most astounding archaeological discoveries, and since then, the name of this short-lived boy pharaoh and his golden face mask have become world famous.

While that original face mask and the sarcophagus will be on display in Cairo’s new museum, visitors can get up close to magnificent reproductions in the Castle’s Egyptian Exhibition, which reveals more about the Earl’s story and his fascination with Egypt.

The six rooms of the exhibition catalogue the Earl’s early excavations from 1906 onwards, his relationship with his friend Howard Carter and the discovery and contents of the tomb.

As well as some rare antiquities from the 5th Earl’s earlier Egyptian excavations, the exhibition also displays exact replicas of the Boy Pharoah’s Shrine, the Middle Coffin, the Mummy and the iconic Death Mask of the Boy Pharaoh.

Steeped in history, and set in grounds landscaped by Capability Brown, the present-day Castle was designed in 1842 by Sir Charles Barry, the architect also responsible for building the Houses of Parliament in Westminster, and the estate is still run by Lord and Lady Carnarvon today.

This autumn will also see a new book by Lady Carnarvon, Visitor to an Antique Land: The 5th Earl of Carnarvon – Treasure, Tragedy and the Discovery of Tutankhamun’s Tomb, revealing previously unpublished material from the Earl’s life, travels and discoveries.

Meanwhile, there is plenty more to see and do around the Highclere estate.

The picturesque town of Whitchurch lies just over nine miles to the east of the Castle, where visitors can explore its historic 19th century silk mill sitting along the River Test, while nearby Laverstoke is the home of the state-of-the-art Bombay Sapphire gin distillery, offering Discovery Experiences and gin cocktail masterclasses.

To the south lies the Test Valley, known for its unspoilt countryside and pretty market towns, with garden enthusiasts spoilt for choice, thanks to the Sir Harold Hillier Gardens and National Trust property Mottisfont.