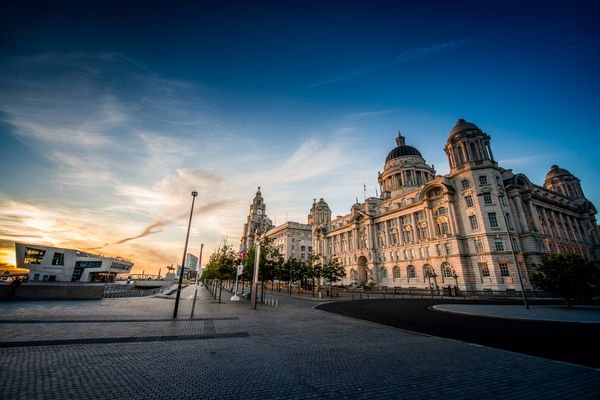 2021 saw Liverpool open a whole host of brand new attractions, hotels, bars and restaurants. Some of these include The History Whisperer, an immersive visitor attraction at St George’s Hall; INNSiDE Liverpool, a brand new hotel on Old Hall Street inside the old Echo newspaper offices; and GPO, Liverpool’s largest food hall full of independent vendors, all to great success.

There is no slowing down for Liverpool in 2022 as we get ready to roll out the red carpet for lots of huge events and brand new openings.

From exhibitions on Time Lords and Tudors to brand new theatres, sporting firsts and festivals, we’ve listed below some of the biggest events and attractions not to miss next year with lots more to be announced too.

Liverpool doubles as Gotham City for The Batman

In March 2022, Liverpool will take a starring role in ‘The Batman’ as a double for Gotham City. With many scenes featuring iconic Liverpool locations such as the Royal Liver Building and St George’s Hall, it’s the perfect time to come to Liverpool for a film tour.

For his Gotham City, The Batman director Matt Reeves wanted to create “an American city you’ve never been to”. Step in Liverpool, the waterfront city in northern England more commonly associated with football and The Beatles. Batman fans will see the city double up as Gotham throughout the 2022 blockbuster, with Robert Pattinson and Zoe Kravitz filming at several of its most famous sites.

Watch the trailer for The Batman here.

Space, The Universe and Everything

An immersive art experience, known as ‘Space, The Universe and Everything’ is set to transform the inside of Liverpool Cathedral with an extraordinary display of lights, projections and sound, which will see visitors surrounded by the awe-inspiring wonders of the universe as they walk through the building’s vast splendour.

Find out more about Space, The Universe and Everything here.

Liverpool Sound City is the UK’s leading independent festival for new music taking place across the city centre in some of Liverpool’s much loved music venues. The three day festival features some of the biggest up-and-coming artists and grassroots talent alongside a conference on all things music. The first 15 names to celebrate 15 years of Sound City have been announced, as The Lathums take to the stage for their first ever headline slot at a major festival. With 100s more acts to be announced, tickets are on sale for one of Liverpool’s biggest weekends in music.

The Tudors: Passion, Power and Politics

Step back in time to the Tudor court and discover the fascinating politics, powerful family connections and unique culture of the most famous royals in history at Walker Art Gallery. Portraits on display will include the Tudor monarchs, alongside their counsellors and courtiers with some of the works having never been shown outside of London, including a portrait of Jane Seymour. The exhibition will consider the Tudors from a range of perspectives, spotlighting some historically underrepresented aspects of the period including Black Tudor history and LGBTQ+ history.

Find out more about The Tudors: Passion, Power and Politics here.

Doctor Who: Worlds of Wonder

From epic monsters to costumes and props, science is brought to life exploring some of the Doctor’s many adventures and encounters through space and time in Doctor Who: Worlds of Wonder at World Museum.

This world premiere exhibition will see visitors engage with original artefacts, sets and much more – it’s a must-see for any fan of Doctor Who and science enthusiasts too.

Explore the past, present and future of the Earth and the vast reaches of the cosmos in this imaginative new exhibition, presented by Sarner International under license from BBC Studios.

Find out more about the Doctor Who: Worlds of wonder exhibition here.

A brand new food festival celebrating the people and food that make Liverpool one of the most exciting foodie destinations in the UK heads to the city on the Queen’s Platinum Jubilee weekend celebrations. It’s one for every visitor’s diary.

Coming to venues across Liverpool in June 2022, over the 50th anniversary weekend of The Rise and Fall of Ziggy Stardust and the Spiders from Mars, an all-star line-up of David Bowie’s closest friends and collaborators will come together exclusively to celebrate the Man Who Fell To Earth.

The grand opening of this new arts and culture attraction in the North, located in Prescot, Liverpool is only 10 miles east of Liverpool City Centre. Prescot has a historic connection to William Shakespeare, through the support he received from the Earls of Derby. Now, four-and-a-half centuries later sees the arrival of Shakespeare North Playhouse – at its core is a 470-seat theatre, a complete replica of the cockpit-in-court design popular during the Elizabethan era. Alongside the theatre will be an outdoor performance garden, exhibition and visitor centre and educational facilities.

Find out more about the Shakespeare North Playhouse here.

For the first time, the men’s, women’s and wheelchair tournaments in the Rugby League World Cup will take place together in 2022 and the Totally Wicked Stadium in St Helens has been announced as one of the host venues.

Find out more about the Rugby League World Cup here.

The Turner Prize at Tate Liverpool

Liverpool will also be living up to its reputation as a hub for contemporary art when it welcomes the Turner Prize, the most famous award in the UK, which comes to Tate Liverpool at the Royal Albert Dock in October 2022.

Find out more about The Turner Prize here.

Liverpool’s much-loved light trail, River of Light, will return to the city’s waterfront next October for another celebration of light, sound and art. Showcasing installations from local and international artists, the concept, whilst largely under wraps, will link into the World Gymnastics Championships that takes place at the same time at the M&S Bank Area.

Find out more about River of Light Trail from 2021 here.

There will be a show like never before on Liverpool’s waterfront next autumn, as more than 500 of the world’s best gymnasts from 75 countries descend on the M&S Bank Arena for the 51st FIG artistic Gymnastics World Championships. They will battle it out across a full range of artistic gymnastic disciplines, to be crowned world champion and qualify for the Paris Olympics in 2024.

Find out more about the World Gymnastics Championships Liverpool 2022 here.

Set to open in autumn 2022, Eureka! Science + Discovery will be one of the North West’s most innovative new visitor attractions and has been co-created specifically with and for children and young people aged 6 – 14. Building on the award-winning approach of Eureka! The National Children’s Museum in Yorkshire, the attraction also features a dedicated area for the under 5s and will encourage today’s younger generations to explore and engage with the exciting science stories and challenges of today and the future.

This website uses cookies to improve your experience while you navigate through the website. Out of these, the cookies that are categorized as necessary are stored on your browser as they are essential for the working of basic functionalities of the website. We also use third-party cookies that help us analyze and understand how you use this website. These cookies will be stored in your browser only with your consent. You also have the option to opt-out of these cookies. But opting out of some of these cookies may affect your browsing experience.
Necessary Always Enabled

Performance cookies are used to understand and analyze the key performance indexes of the website which helps in delivering a better user experience for the visitors.

Analytical cookies are used to understand how visitors interact with the website. These cookies help provide information on metrics the number of visitors, bounce rate, traffic source, etc.

Advertisement cookies are used to provide visitors with relevant ads and marketing campaigns. These cookies track visitors across websites and collect information to provide customized ads.

Other uncategorized cookies are those that are being analyzed and have not been classified into a category as yet.