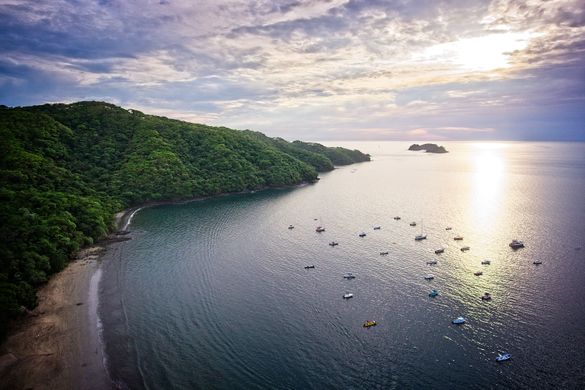 Being recently awarded the ‘Best Emerging Destination’ in The Times and Sunday Times Travel Awards, Costa Rica is looking forward to welcoming visitors over the summer months and beyond. The Central American country has reached 98.58% of renewable electricity generation in the first six months of the year; and has awarded 140 of its beaches with Blue Flag status – the highest number ever.

Costa Rica added 98.58% of renewable regeneration to its National Electric System during the first six months of 2022. This trend, which started in 2015, consolidates the position of Costa Rica as leader in clean energy production. As published in a 2021 study conducted by the organisation REN21, which specialises in sustainable energy, Costa Rica is one of the leading nations of renewable production on the planet.

Between January and June 2022, water provided 70.08% of energy for national plants. The second largest contribution was geothermal energy, providing 14.8%, followed by wind at 13.46%. Biomass and solar power accounted for 0.86%, and thermal power plants accounted for 1,42%. In the second half of 2022, renewable regeneration is expected increase as Costa Rica enters its wettest period of the year.

The Costa Rica Tourism Board is collaborating with the National Forestry Financing Fund (Fonafifo) in its continued fight against climate change by raising visitors’ awareness of their carbon footprints. Travellers to Costa Rica are now able to log into a simple online tool to calculate the carbon emissions of their flight dependant on their flight distance and to the number of passengers travelling. A voluntary donation reflecting ones carbon footprint can then be made to Fonafifo, who will invest it into different enviromental projects throughout the country, such as planting forests, aiding local farmers and regenerating natural spaces. This partnership is part of the tourists board’s “Pura Vida Pledge”, a promise to educate visitors as to the true meaning of sustainable tourism and to the actions they can take to make a responsible difference.

The Costa Rica Tourism Board (ICT) has awarded the Blue Flag status to a record number of 140 beaches for 2022 – the highest number to date. The list recognises the cleanest and most sustainable beaches in the country, which are evaluated against strict criteria in order to become part of Costa Rica’s prestigious Blue Flag Ecology Programme (PBAE). Beaches included in this scheme feature clean sands, excellent sea water quality, waste disposal programmes, accessibility to showers and toilets and availability of lifeguards and emergency staff throughout the year.

Eleven Costa Rican beaches have been given five stars (highest score) in this year’s list, including Punta del Madero and El Jobo (Guanacaste), Playa Playitas (Quepos) and Playa Blanca (Cahuita). The province of Guanacaste is the region with more blue flags in the country, totalling 43. Founded in 2004, the Blue Flag Ecology Programme is a joint venture of several Costa Rican authorities, including ICT, the Ministry of Environment and Energy and the Institute of Aqueducts and Sewers.

Costa Rica has declared Puerto Limón’s Grand Gala Parade as Intangible Cultural Heritage. This means that the event is now declared of public interest and the diverse authorities will be working closer together to promote the colourful event.

Limón Carnival is Costa Rica’s biggest street party and takes place in the Caribbean port city of Limón every October, coinciding with the Caribbean dry season. During the week-long carnival, the coastal town plays host to a variety of lively parades, colourful fireworks and music performances for visitors of all ages. Puerto Limón Carnival, celebrated since 1949, pays tribute to Christopher Columbus, who landed in Uvita (an island opposite Puerto Limón) in 1502 during his exploration of the new world. It also honours all of the immigrants who later came to Costa Rica from all over the world. This festivity is one of the best times to experience Costa Rica’s Caribbean heritage, a unique part of the country’s culture – Limón has a large and vibrant Afro-Caribbean community. For this reason, visitors can expect reggae and calypso sounds filling the air together with Caribbean street food.

Costa Rica won the award for ‘Best Emerging Destination’ at the recent edition of The Times and Sunday Times Travel Awards. The Central American country was praised by its nature, wildlife biodiversity and for becoming a global leader in sustainable practices, making it an ideal destination for people to visit.

The ninth edition of The Times and Sunday Times Travel Awards was held in Matera, Italy, 28-30 June 2022. The awards celebrate the best destinations, operators, airlines, cruise lines and hotels; and are voted on by readers – with more than 270,000 votes from readers this year across 12 categories for 120 destinations.

Costa Rica’s Monteverde Cloud Forest and Corcovado National Park have been named as two of the best spots to see wildlife in Central America, according to Lonely Planet. The prestigious travel publication has compiled a list of the 7 best places for wildlife spotting and Costa Rica has taken two of those places.

Monteverde Cloud Forest, in Puntarenas, is the best place for bird-watchers. With over 400 different bird species and a wide array of monkeys and sloths, animal sightings are guaranteed here, at altitudes of between 4,600 and 5,900 feet. Some species that can be spotted in Monteverde include the Resplendent Quetzal, Black and Yellow Silky Flycatcher, Chiriqui Quail Dove and the Three-Wattled BellBir.

On the other hand, Corcovado National Park has been chosen as the best for diversity. Costa Rica proudly shelters approximately 6.5% of the known biodiversity in the world – and Corcovado National Park houses half of that; that’s why it’s described as the “most biologically intense place on Earth”. Corcovado spreads over 426 square kilometres on the Osa Peninsula and is a must-visit place for nature, wildlife and hiking enthusiasts. Spider monkeys, sloths and anteaters are some of the species that visitors can spot in the park. It is compulsory to visit Corcovado with a certified guide.