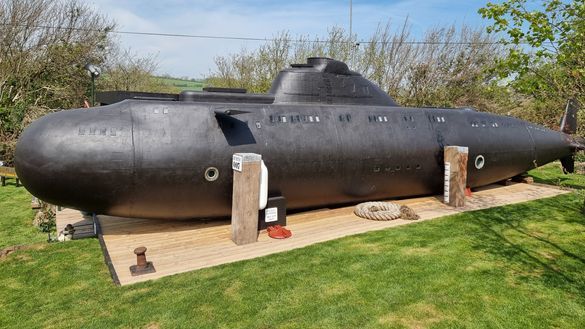 Introducing the Isle of Wight’s newest place to stay – a submarine replica, originally used in the James Bond film, The World Is Not Enough.

HMS Bond is a copy of a Soviet Victor III class nuclear-powered submarine and is available for hire at Windmill Campersite near Carisbrooke Castle on the Isle of Wight. This family-run site is already one of the quirkiest glamping sites in the UK and the new sub compliments a Falklands helicopter, shepherds’ huts, a dairy cottage and a spit-screen VW Camper.

The teardrop-shaped submarine, which cost the owners around £40,000 to convert into accommodation, is now taking bookings and customers can stay from Friday 29 April 2022 onwards. It features two double beds and a single bunk, sleeping 5 people. Like the real submarine it has little head room but loads of character. It is equipped with trap doors, ladders, an interactive dashboard and a periscope.

Renovation began took place over the winter months of 2021-2022. The team at Windmill Campersite stripped out galvanised buoyancy tanks, miles of hydraulic hoses and an ingenious feature which enabled the huge replica to float and drive in the film. Once done, the team worked night and day to complete the conversion for launch in Spring 2022. This involved adding a mobile container now named ‘The Dock’, which houses the canteen and washing facilities including a well-equipped kitchen, shower, toilet, eating area and doors out to the patio.

The site itself has picturesque views of the Bowcombe valley, walks through the Clatterford streams and Carisbrooke Castle is just minutes away. Communal amenities onsite include a BBQ with pizza and baked potato oven, a firepit for toasting marshmallows, a large dining area and a silent disco hut.

Booking and Getting There

HMS Bond is available to book direct with Windmill Campersite, with prices starting at £450 for 4 nights in low season. Travelling to the Isle of Wight has never been easier than with Wightlink, the leading eco-friendly cross-Solent ferry company.

Customers can benefit from 15% off vehicle crossings on Wightlink ferry services from Portsmouth to Fishbourne and Lymington to Yarmouth when booked through Windmill Campersite.