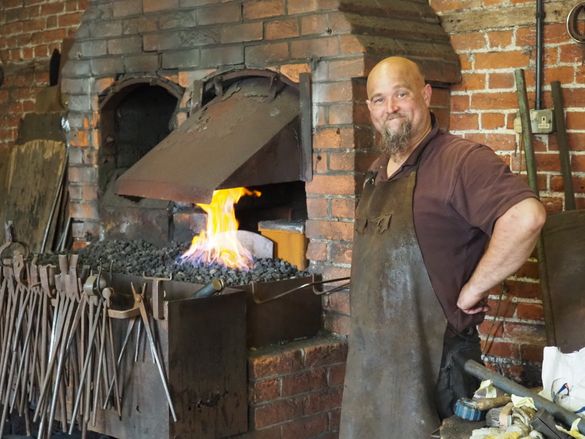 A giant monk sculpture made from steel will be on display in the Abbey Gardens to celebrate St Edmund’s Day (20 November) in Bury St Edmunds and to promote the Abbey 1000 celebrations for 2022. The 7ft 6ins tall monk will be installed in the crypt in the abbey ruins, where St Edmund’s Shrine would have stood, from Friday 19 November to Sunday 21 November.

This preview weekend will be the public’s only chance to take a photograph or selfie with the monk this year for entry into an online competition. The monk will not be displayed again until next May, when it will be the first installation at the Abbey 1000 Sculpture Exhibition. Running from 1 May to 30 November 2022, the exhibition will feature a different sculpture each month displayed in the crypt.

Designed by Nigel Kaines and made by blacksmith Kevin Baldwin from Designs on Metal, the monk statue is made from 2mm thick steel and weighs some 250kg. It took Kevin six weeks to make, much of it with only a hammer. A full-size monk’s habit was used as a pattern and the monk’s hands were modelled on Kevin’s, which were then scaled up – much as Dame Elisabeth Frink’s St Edmund statue in the Great Churchyard has her nose!

Commenting on his latest artwork, Kevin said: “This is certainly the most unusual project I have worked on. But it means a great deal to me because I am from Bury St Edmunds and generations of my family are from the town and I love its history.

“It was quite tricky to create the look of a flowing monk’s robe in steel so I used a pattern for the robe, much as a dressmaker would use for a costume. It was then a case of using traditional methods to create the monk, the same methods that would have been used 1000 years ago.”

Designs on Metal have made several of the metal sculptures, which can be seen around Bury St Edmunds including ‘St Edmund at his Martyrdom’ on the Risbygate Street roundabout at Parkway; St Edmund’s crown for ‘The Legend of the Wolf of St Edmund’ installed at the Southgate Green Roundabout; the wheat on ‘With the Grain’ on the King’s Road roundabout at Parkway; the ‘Flight of Peace’ sculpture at the Lady Miriam Way roundabout and the ‘James Moore Cyclist Sculpture’ on the Mount Road/Orttewell roundabout. They also created the ‘Our Liberty’ memorial in the Abbey Gardens, which has the town’s motto inscribed ‘Shrine of The King, Cradle of The Law’, and was designed by Nigel Kaines.

A competition will be run over the weekend of 19 – 21 November on Bury St Edmunds and Beyond’s Instagram channel www.instagram.com/burystedmundsandbeyond and Facebook page www.facebook.com/burystedmundsandbeyond for the most imaginative photograph with the monk. The winner will receive a £50 Bury St Edmunds gift card, which can be used in more than 40 different outlets around the town centre.

Flying the flag for St Edmund

A new brand for St Edmund’s Day has been created this year. For the first time, St Edmund’s flag will be flown on top of the Abbey Gate and The Angel Hotel on Angel Hill as well as the town’s Police Station in Raingate Street and The Apex in Charter Square. Additionally, the flag is also flown every year at West Suffolk’s Council’s offices in West Suffolk House in Western Way and at the Greene King Brewery in Westgate Street.

Businesses in the town will also be decorating their premises with St Edmund’s bunting, including the arc shopping centre.

A free children’s activity pack created by Bury St Edmunds designer Rebecca Austin is available to download at www.burystedmundsandbeyond.co.uk/st-edmunds-day. The pack includes details about St Edmund and St Edmund’s Day as well as the former Patron Saint’s flag, which children are encouraged to colour in and display in their home or school windows throughout St Edmund’s day weekend.

It also contains a drawing of the Abbey Gate; during the dissolution of the monasteries in 1539 the sculptures that once adorned the archway were removed and presumed destroyed. Children are encouraged to create their own sculptures and draw them where the statues used to be in the archway.

Bury St Edmunds and Beyond has teamed up with the Bury Free Press newspaper for the designer of the best sculpture to win a West Suffolk Council family heritage pass giving free access to West Stow Anglo Saxon Village and Moyse’s Hall Museum for a year. Children aged 3-13 years can take part with entries split into three age groups; the winner in each category will receive a £20 Bury St Edmunds gift card, while the overall winner will receive the annual pass.

Various celebrations will be taking place in and around Bury St Edmunds during the 19 – 21 November St Edmund’s day weekend.

St Edmundsbury Cathedral is running a special night with an evening of music, guided mini-tours and mulled wine on Friday, 19 November from 6.30pm to 8.30pm. For more details visit www.stedscathedral.org/whats-on.

Baskerville’s in Whiting Street, a vegan coffee shop with a secret, hidden cocktail bar, has added a St Edmund’s Crown cocktail ‘fit for a king’ to their menu for St Edmund’s Day weekend.  The cocktail is made with white mulled wine tea syrup, King’s ginger liqueur, locally produced white wine, Courvoisier and lemon. The white mulled wine tea is sourced locally from Crude Drinks at Moreton Hall in Bury St Edmunds, while the syrup is made in-house.

Bury St Edmunds and Beyond has teamed up with Gifford’s Hall Vineyard in Hartest to win a bottle of their St Edmundsbury wine and a Grand Tour of their vineyard for two in 2022. Enter online between 15 November and 15 December at www.burystedmundsandbeyond.co.uk for a chance to win.