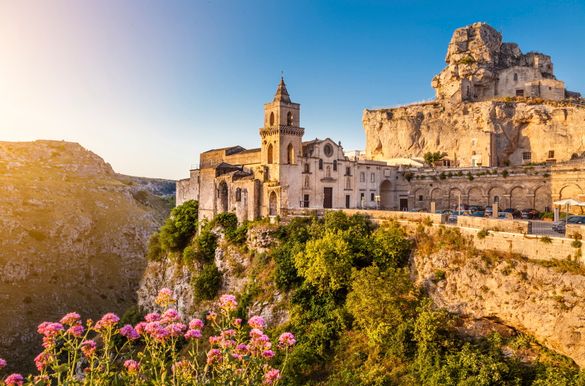 Each new film sees 007 jet off to another exciting location to seek out his latest enemy in style. The globe-trotting spy fights crime from London to Mexico and the latest instalment, No Time to Die, set to be released in the UK on 30 September, has him searching the streets of Matera in southern Italy for the villain.

LOTUS has collated a selection of tours that visit some of the best locations he has visited so you can follow in his footsteps and see the backdrops of a few of the most iconic movies.

Walk the streets of Puglia and Matera from £1,549 per person

Puglia and Matera, two lesser-known regions of Italy, are nestled between the emerald waters of the Adriatic and Ionian seas and form the heel of Italy’s “boot.” The UNESCO-protected Sassi district in Matera is not only renowned for its beauty but the millennia-old cave dwelling was one of the backdrops of the James Bond film No Time to Die. Filming also took place in the quaint streets of Gravina in Puglia, famous for its ancient Roman structures, including a two-level bridge that runs across the river and several cathedrals and churches. Travellers will have the chance to explore the area as well as other Italian gems from Trulli houses of the lush Itria valley to the white hilltop town of Ostuni. Aside from the perfect mix of cultural discovery and gentle walking, guests will have the chance to sample the fantastic local cuisine and delicious wines that make this region a true food lovers’ paradise.

Stay in the Aquatio Cave, Matera from £1,149 per person

Aquatio Cave Luxury Hotel & Spa, an enchanting five-star cave hotel carved out of the rock, is in the heart of Sassi, the UNESCO world heritage district of Matera, one of the world’s oldest cities and the 2019 European Capital of Culture. Not only is the site renowned for its outstanding beauty but also for its appearance as the stunning background of the 25th Bond film. This luxurious cave hotel is a brilliant fusion of modern function and technology with ancient material and simplicity. Every part celebrates the natural limestone rock, from the 35 rooms and suites to the restaurant, bars, and outdoor courtyard. When away from the action visitors can spend time unwinding at the unique, spacious spa and swimming pool, which features recovered underground rooms that date back to the ninth century.

Citalia (citalia.com) offer a four-night stay at the Aquatio Cave Luxury Hotel priced from £1149 per person and includes return flights from London Gatwick, airport transfers and breakfast daily. Based on 24 April departure.

Go cross-country skiing in Venabu, Norway from £1,639 per person

This seven-night skiing holiday is set in Venabu in central Norway, on the edge of the Rondane National Park, looking down on the Gudbrandsdalen Valley, just north of Lillehammer. The dramatic landscape, that is the backdrop of the new Bond film No Time to Die, is full of contrasts, from spectacular gorges and lofty peaks to pretty fells and verdant valleys that extend as far as the eye can see. It has always been traditional to travel on skis here so it is perfect for a skiing escape and is suitable for all levels as the guides will help everyone to get started. This is Norway’s vast yet beautiful, untouched wilderness at its best and it is common to sport moose and reindeer. The Venabu Fjell hotel offers traditional Scandinavian cuisine and boasts glorious panoramic vistas out across the mountains.

Headwater(Headwater.com) offer a seven-night tour Cross-country skiing in Venabu priced from £1,639per person and includes return flights from London, accommodation, all meals, five days ski tuition and guided excursions, all classic ski equipment hire, ski wax and access to ski trails, one yoga or pilates session and airport transfers. Multiple departure dates including 19 and 26 December 2021, 8, 15, 22 and 29 of January 2022

The Ultimate Italian Bond Holiday from £3,099 per person

Citalia is offering a 14-night itinerary through Italy to enjoy the ultimate James Bond experience, staying in five separate locations that have been iconic backdrops to the films. Guests will relax on the shores of Lake Como as seen in Casino Royale, dine on the waterfronts in Venice found in From Russia with Love, try traditional Tuscan cuisine in Siena where Bond met Yusef Kabira in the Quantum of Solace film and explore the heart of Rome as in Spectre. Citalia recommends ending the trip with a stay in a cave hotel, carved out of the rocks in the UNESCO-protected Sassi district of Matera, which features in the opening sequence in the trailer for latest release: No Time to Die.

Citalia (citalia.com) offers a 14-night tour The Ultimate Bond Itinerary from £3,099 per person with flights from London Gatwick, private car hire and breakfast daily. The price includes three nights in GH Victoria Concept & Spa on Lake Como; three nights at Savoja Jolanda in Venice; three nights at the Castel Monastero near Siena; three nights in the Forum, Rome; and two nights in Aquatio Cave Luxury Hotel, Matera. Based on 5 May 2022 departure.

The stunning islands of Guernsey may have played an integral part in the creation of the James Bond franchise that millions have now grown to love. When retracing the historic events of WW2, the strategic islands of Guernsey, Alderney, Sark, Herm and Lihou had fallen under German occupation. As part of British efforts to reseize control of the islands several operations were launched by Small Scale Raiding Force (SSRF) British commandoes, including Operation BASALT on October 3rd, 1942. They raided Sark with the dual objective of capturing prisoners and offensive reconnaissance. Take a stroll along the Hog’s Back headland and view the exact spot where they scaled the treacherous cliffs.

The raid was led by Major Geoffrey Appleyard, who worked alongside a Naval Intelligence Officer by the name of Ian Fleming. Fleming was so inspired by the SSRF, including the night raid on Sark and other missions, that he went on to write his series of spy novels. The legendary main character, James Bond, is said to be based on Appleyard and three of his SSRF colleagues; one of whom, Major Anders Lassen VC, also took part in the Sark raid.

Bond enthusiasts alike can now travel to these striking islands and absorb the unique landscapes that helped inspire one of the most infamous franchises of all time.

Channel Islands Direct (www.channelislandsdirect.co.uk) offers a four-night stay at the four-star The Duke of Richmond priced from £435 per person including return flights from London Gatwick with Aurigny and breakfasts daily. Based on travel between 1 – 30 September 2021 departure for two adults sharing. Full details available here. ATOL protected.

Ahead of the release of ‘No Time to Die’ why not try injecting a bit of ‘thrill’ into your next visit to the capital and try this incredible walking tour of some of the most famous sites of the Bond movie franchise. Led by local guide and Bond aficionado, Ian. The private tour will take fans to notable Bond locations across the capital such as Dukes London hotel and bar which inspired the phrase ‘shaken not stirred’, the Hildebrand Safe House featured in Spectre, the buildings that double as MI6 HQ, and London’s oldest restaurant which opened in 1798 and featured in the movies. Throughout the tour, Ian will be able to provide surprising facts and trivia tied to the films, as well as some special insider knowledge about various actors who have made the iconic role their own.