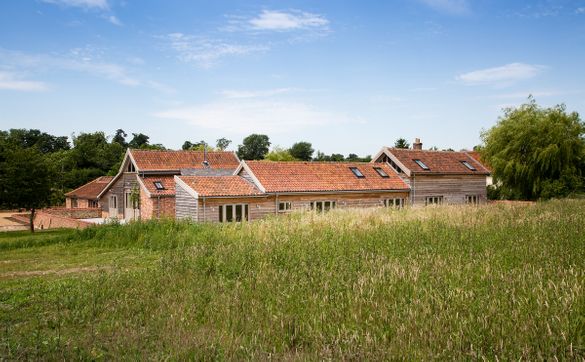 Over the past few years, the staycation ecosystem has evolved with fresh ideas opening up new ways of appreciating Britain’s beautiful countryside, from pop-up glamping sites and revived country houses to smart B&Bs. Set on a former dairy farm amidst quiet, bucolic fields near the old Roman settlement of Coddenham, Retreat East offers stylish accommodation in a range of barns and the original 16th-century farmhouse, and a small spa and restaurant, with many ingredients plucked from the kitchen garden, although guests can also self-cater.

The story Architect Dominic Richards, a graduate of The Prince of Wales’ Institute of Architecture, has been coming to the Suffolk countryside for years as an antidote to urban stress. When a rundown farm close to his home came up for sale, he saw the potential to create an organic, sustainable retreat that would be both an asset to the local community and a pitstop for weary Londoners. Teaming up with an old friend, he bought the farm and set about turning his vision into a reality, restoring and reimagining the farm buildings as sustainably as possible. Solar panels, responsibly sourced wood, an onsite well for water and its own sewage plant ensure that the project impacts the environment as little as possible. The kitchen garden is organic and fertilised using composted food waste. Plus, a rewilding programme for the former agricultural land is underway.

The bedrooms Retreat East is based around the original, timber-framed farmhouse which dates back to the 16th century and has four bedrooms – and a versatile range of 16 striking farm buildings and barns that can sleep between two and four guests. The barns are equipped with bathrooms, kitchens, wood burners and dining spaces, as well as large private outdoor terraces. All have country views over the meadows and fields and have a rustic chic design with wood panelling, soft linen fabrics and bespoke furniture along with Smeg, Miele and Nespresso appliances. Recent additions include luxury spa barns, The Nest and The Coop, both of which have grand outdoor roll-top baths on private decks and four-poster beds.

The Great Barn At the heart of Retreat East is the triple-height Great Barn. Here you’ll find sofas to lounge on and a centrepiece fireplace for winter, along with the bar and restaurant. Cocktails include French Martini made with pineapple, and a Rhubarb Sour; the inventive menu draws on local and homegrown produce for dishes such as roast lamb rump with asparagus and wild garlic ketchup, day boat fish with brown shrimp and samphire, superfood salad, garden-pea risotto and starters such as Wye Valley smoked salmon, white onion and apple soup.

The spa Set amid the peaceful rural landscape, the spa is small – with two treatment rooms – but has a holistic mindset and expert treatments are based on Traditional Five Elements, including vegan-friendly facials and Muscle Melt massages, along with reflexology. There are also Spa Days available, costing from £115 and including a 60-minute massage, one-hour use of the spa, an hour’s use of the hot tub and a two-course lunch.

Sustainability One of Retreat East’s core values is to work harmoniously with the environment to leave as little carbon footprint as possible. Heating systems in the barns are set to ensure no heat is wasted, including The Great Barn which is powered by solar panels. At least 30% of the wood harvested for the barn stoves comes from fallen trees on site, while the water used on-site comes from the property’s own borehole which taps into the onsite well. In 2019 Retreat East installed its own sewage plant which ensures it gets treated in a sustainable manner before being converted back into clean water. All cleaning products and bathroom amenities are organic bio-based oils, and laundry is outsourced to an ecologically minded dry-cleaning company. The kitchen garden is one of Retreat East’s key features and provides organically grown fruit and vegetables that are served in The Great Barn and farm shop. All compostable food waste is placed in compost heaps and reinjected back into the soil at the right time, as well as grass and plant cuttings.

Nearby The Suffolk countryside is one of the UK’s loveliest landscapes, with ancient churches, chocolate-box villages, painterly fields and an unspoilt coastline. There are rewarding day trips to be had visiting archaeology landmark Sutton Hoo – recently spotted in Netflix film The Dig – and quaint villages such as Woodbridge, Aldeburgh and Snape Maltings. Families will enjoy the open play areas of Easton Farm Park, Framlingham Castle and Helmingham Hall Gardens, while Shrubland Hall, with its grounds designed by Humphrey Repton, is within walking distance, and provisions can be picked up from Suffolk Food Hall. Retreat East is close to Coddenham, which was once the site of a Roman settlement and is now a pleasant village with Suffolk’s distinctive pink-plaster traditional thatched houses.

Management team In May 2022, Craig Jameson was appointed General Manager of Retreat East, replacing former General Manager, Leyton Williams, who is now the retreat’s Commercial Director. As part of his role as General Manager, Craig will be supporting Dominic Richards and the team in continuing to deliver excellent service to guests, roll out new projects, and develop the Food & Beverage offering with newly appointed Head Chef, Adam Spicer.

For those travelling by train, Ipswich station is a 20-minute taxi ride away. Retreat East is also available for special occasions and can be rented out in its entirety for weddings, conferences and other large events. Dogs are welcome.

Prices at Retreat East start from approximately £130 per night. To make a booking visit www.retreateast.co.uk.