Embark on an Icy Adventure in Estonia This Winter 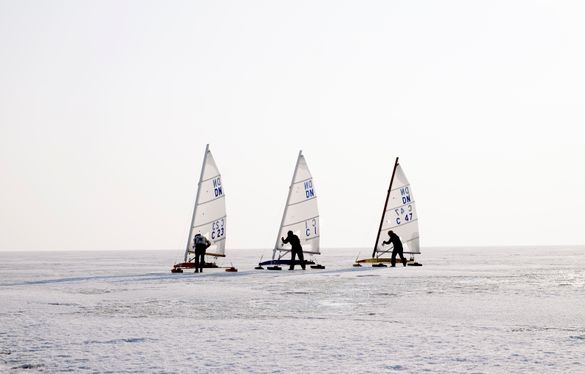 Averaging -8°C throughout the winter months, Estonia is transformed into a frozen wonderland, with snowy forests and ice roads. From ice waterfalls you can walk behind to a post-sauna swim in sub-zero temperatures, Estonia offers winter activities that visitors will never forget.

Driving on the ice roads to one of Estonia’s 2,000 islands

A true symbol of the Estonian winter, ice roads occur in the case of a very cold winter, allowing for ice that is thick enough to be driven on. For those who drive on the ice, it is mandatory not to wear a seatbelt. Though the roads are a unique attraction for tourists, this is typical occurrence for Estonians, often creating an easier method of transport in between the mainland and the islands. In the instance of the Haapsalu to Noarootsi route, the ice road creates a route that is 10km shorter than usual. This route also holds the record for the highest number of cars using the ice road, which was in 2013, when 19,979 vehicles travelled from Haapsalu to Noarootsi over 77 days. For advanced ice travellers, the Kihnu ice road – approximately 15km – is highly recommended, providing a picturesque journey across the frozen Baltic Sea to the UNESCO world heritage listed island.

One of the most beautiful features of the Estonia winter is the freezing over of waterfalls. The highest of these is the Valaste waterfall, approximately 30m high. Situated only a 30-minute drive from Tallinn, Estonia’s widest waterfall – the Jägala waterfall – becomes a 50m glistening ice wall with icicles cascading down. During some winters, it is possible for visitors to walk behind the frozen waterfall. A trip with a local guide is highly recommended, as visitors can usually enjoy a cosy winter picnic, with traditional food and hot tea, to warm themselves after the icy walk.

Sailing on ice in Haapsalu

Although the colder months often signify the end of the sailing season across much of Europe, this period brings about a whole different sailing season in Estonia. Thrill-seekers take to the hardened ice, boarding boats with sledge-like bases to move across the frozen sea. A popular method of transportation in the 17th century, today ice sailing is an adrenaline-fueled sporting activity, often reaching speeds of over 60 mph. For those new to the activity, a trip with an experienced instructor is highly advisable. As one of the bays to freeze first, Haapsalu is the ideal spot to try sailing on the ice.

The old Võromaa smoke sauna traditions have been honoured as part of the UNESCO intangible cultural heritage of the world. This ancient tradition involves a sauna session of at least three hours, where visitors experience the rich aroma of burning, complemented by a subtle hint of birch boughs and honey. Located next to a pond, visitors will also take a quick dip in the icy waters after the sauna session. Rarely exceeding 20 degrees even in the summer months, the water temperature during this period is likely to be around 1-degree Celsius, often resulting in an icy cap over the pond, with the surrounding areas covered in snow. The contrast in temperatures is said to have a calming effect, soothing both body and mind. Winter swimming has increased in popularity in Estonia over the recent years, with the World Championships held in Estonia in 2018. For visitors looking for a more adventurous sauna experience, Estonia holds a Sauna Marathon in the resort of Otepaa. Teams of four must visit a list of local saunas as possible, spending a minimum of three minutes in each of them.