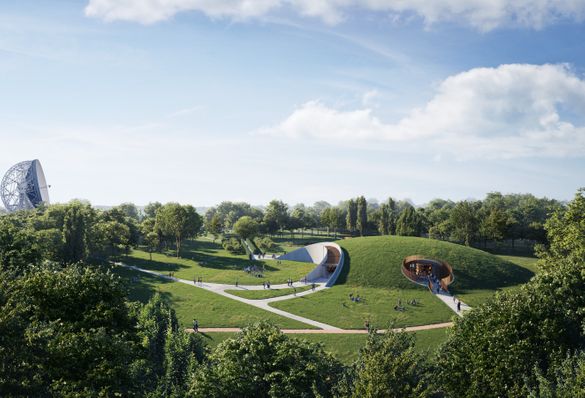 Jodrell Bank will launch its multi-million pound First Light Project with the opening of the First Light Pavilion (pictured) this spring. The must-see national heritage attraction is set in a stunning new building in the shadow of the mighty Lovell Telescope, which was named a Unesco World Heritage Site in 2019 because of its global role in achieving a transformational understanding of the Universe. Designed by internationally acclaimed architects HASSELL Studio, the Pavilion will include a gallery dedicated to telling the story of Jodrell Bank, an immersive projection space and auditorium, and an education hub and cafe. Go to www.jodrellbank.net/the-first-light-pavilion.

Due to open its doors in summer, Wildes Chester is a new boutique hotel in prime position in Chester’s medieval Rows, overlooking the High Cross. It will feature 18 luxurious rooms, a spa, and restaurant X by Harry Guy. Go to www.wildeschester.com.

Ice-cream fans can take a tasty tour of Cheshire’s artisan parlours by following the new self-guided trail The Delicious Dozen. The landlocked county may not be known for its seaside attractions but this is dairy country, with ice-cream makers popping up from the Welsh borders to the foothills of the Cheshire Peak District. Highlights of the trail include one of the UK’s top visitor attractions, The Ice-Cream Farm. Go to www.visitcheshire.com/ice-cream-trail.

Chester’s medieval Rows will be the subject of a new online and audio walking tour, Discover The Rows, launching in January. Sightseers and shoppers from near and far will be able to learn on the spot about these amazing first-floor open galleries, with revelations including England’s first shopfront and a coded message about a possible visit to the city by Catherine of Aragon. Guides from Roman Tours dressed as medieval soldiers will also be on hand in the city centre to explain a little more about these historic structures.

There’ll be a treat for the eyes in Chester in February with a glorious burst of art installations across the city titled Spring Blooms. Part of a new campaign, Cheshire Designed By Nature, from Destination Chester, the display of artworks – which visitors will be able to find out more about using a new app – will bring the Cheshire countryside into the heart of this green city. Expect nocturnal projections of wildlife, a sculptural swoop of birds, and a stage set in the Cathedral gardens for free theatre performances.